A Sea Monster in New Zealand? 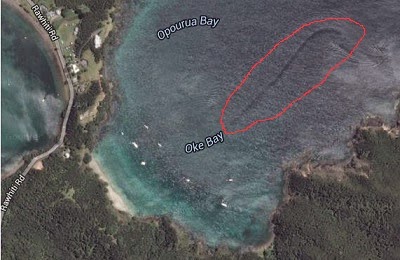 Google Earth has provided us with views of the world that would have been unthinkable twenty years ago. The combination of sattelite photography and mapping software means that there are now few places that can't be viewed over the Internet. Cryptozoologists have made extensive use of the software in their search for unknown sea creatures, such as the Loch Ness Monster. Recently a strange shadow was captured in the ocean near New Zealand, which some observers believe might be a sea monster.

Engineer Pita Witehira, who first spotted the dark mass using Google Earth, told the Daily Mail that he doesn't think it's a boat because there's no white wake. Other people think it's a floating tree trunk.

It isn't the first cryptozoological sighting in the region. In 2013, witnesses snapped a picture of a strange shape off the coast of Australia's Magnetic Island.

First off, it's not a tree trunk and it's not a whale. If you compare the shadow to objects on the shore it clearly is too large to be either of those. It also doesn't look anything like a boat. Not only is there no wake, but the shape is all wrong as well. A large American or Russian nuclear submarine would be big enough to cast such a shadow if it was running close to the surface, but the problem there is that the shadow would be straight rather than curved at one end.

So all things considered, it's probably just a glitch in the Google Earth software. But if it's not, there's something very weird going on in the ocean off New Zealand.