Demons in the Bahamas 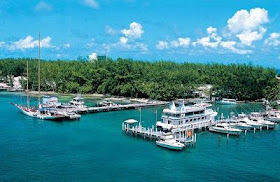 The islands of the Bahamas in the Caribbean Sea have a fascinating paranormal history. In the early 1900's psychic Edgar Cayce predicted that evidence for the existence of the continent of Atlantis would be found in 1968 or 1969 near the island of Bimini. It so happens that in 1968 an unusual formation was discovered off the coast of the island, usually referred to today as the Bimini Road. This formation consists of a line of flat rectangular stone blocks that suggest the possibility of human origin. However, a number of geologists have also pointed out that similar stone structures can occur naturally, as the stone of which the road is composed tends to fracture along flat and rectangular lines giving the appearance of an ancient pavement.

According to this latest story from the region, ancient Atlanteans are not the only paranormal forces that may be loose in the Bahamas. According to Bishop Neil Ellis of Mount Tabor Full Gospel Baptist Church three demonic spirits are also plaguing the islands. In a recent speech Ellis described these demons and their evil intentions.

"Sexual immorality," he told the large crowd, "is the oldest of the three. It's been assigned (to The Bahamas) since the early 1800s. "It has taken root in the lives and psyche of Bahamians." The demon's task - sexual immorality - he said was designed to "keep God's plan for you, from you, destabilise the Bahamian family" and "replace God with himself (the demon)".

He said that the demon of sexual immorality was evident in our society when one saw the high level of "promiscuity going on". Fornication and adultery, he said, are "literally glamorised". Speaking of the "sweetheart syndrome" - one of the three sub-assignments under the main assignment of the sexual immorality demon - "has striven and now become accepted as our normal way of life". As for homosexuality and incest, it was "rampant and ragged in the Bahamas", he said.


Calling up the second demon --financial instability -- Bishop Ellis said it was a demon "sent directly from hell primarily to enslave the people of the Bahamas. "It was designed," he said, "to keep you working, but keep you broke."

"The majority of the people in The Bahamas are one pay cheque away from poverty", he said, adding that there is an agreement between the first two demons. Poverty, caused by demon no 2, "allows demon no 1 to driver persons in poverty to sexual immorality".

The last demon, he said, is widespread throughout the Bahamas, as many are operating in "obeah and voodoo. It has been full blown in our country and it has been for some time." The demon of witchcraft, he said, is designed to "manipulate, intimidate, separate, segregate and control", he said. "It is not assigned to kill you. It is designed and assigned to terrorising until it drives you insane."

Bishop Ellis said this "demon" uses confusion as one of its major weapons. "This spirit will try to bring confusion to the home, the marriage and the family. There are divorced and separated people who love each other, but can't live together. Witchcraft!"

Or in the latter case, maybe they just can't live together without being constantly at odds. That happens all the time, demons or not, in many parts of the world besides the Bahamas.

As a ritual magician, my first thought here is that in order to truly banish a demon you need to know its name. Evangelicals often name demons according to what they do, such as "demon of witchcraft," but in the Bible even Jesus needed to know a demon's name in order to cast it out and I certainly hope that Ellis does not consider himself a better exorcist than the Son of God. My next thought is that social problems can arise on their own without the help of demonic forces. For example, why propose demons as the root of financial instability when oligarchs around the world time and again have proven that they can do it on their own?

Bishop Ellis claims that God has given him a special prayer to banish these "demons," and I sincerely hope that it works, especially in terms of improving the Bahamanian economy which has suffered a lot from the global financial crisis. I just think that even if paranormal forces are involved, there's also a lot of practical mundane work that's going to need to be done to really help improve peoples' lives.